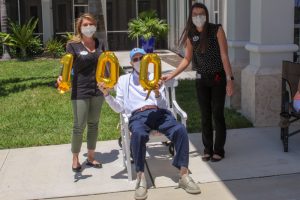 Bus Jensen was born in 1920, just as telephones were becoming commonplace in homes.

Fast forward 100 years, and Bus is still using the phone to communicate with family and friends. Sort of.

Rotary dial phones are long gone, so these days he’s using an iPad to FaceTime his children and grandchildren, and multiple generations recently held a group chat virtually over Zoom. “There have been so many changes. It’s really a different world,” said Bus, an Army veteran who was a decoder during World War II. “It hasn’t stopped changing, and it will probably continue to change.”

As a resident at The Preserve, a senior living community in Fort Myers, Bus has largely remained inside the building as a safety precaution to prevent the spread of COVID-19. Bus’s iPad has become a lifeline to the outside world. “He watches videos on YouTube and Netflix,” said his daughter, Jan Harley. “He does all of his reading on the iPad. That’s how he gets all of his news.” 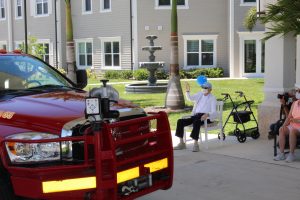 As Bus’s 100th birthday was approaching, family and friends wanted to celebrate the milestone, but knew a traditional birthday party was out of the question because senior living communities are restricting visitor access. So they arranged a surprise birthday vehicle parade on May 7 and invited friends and family along with the Lee County Sheriff’s Office and South Trail Fire & Rescue District. Cars were decorated with “Happy Birthday” signs and balloons, passing by at a safe distance as Bus waved to each vehicle. 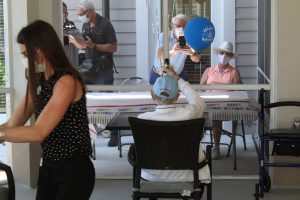 Then, the party moved inside The Preserve’s spacious screened-in patio – residents and staff on the inside, and family members and media on the outside. Bus led a champagne toast and enjoyed a slice of birthday cake with his daughter and son-in-law, who were sitting at a table on the other side of the screen.

Bus is the first resident to turn 100 at The Preserve, which opened in January. Other residents are right behind. The Preserve adopted the same life enrichment program as Cape Coral’s Gulf Coast Village, which also is sponsored by the nonprofit organization Volunteers of America National Services, and the focus is enabling residents to live longer, healthier lives. The life enrichment program is aimed at preventing age-related declines and includes six components of health: physical, spiritual, intellectual, occupational, emotional and social. 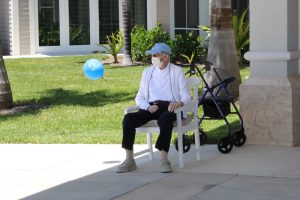 Jan was not surprised Bus reached his 100th birthday with relative ease. His mother lived until she was 101, so good genetics are there, and he didn’t smoke, didn’t drink and was an avid golfer. He started playing the sport at age 12, which led to his first job as a caddie earning 50 seconds per round of golf. Bus reluctantly hung up his clubs last year at the age of 99. “He’d go out and golf today if he could,” Jan said.

About the Author
Rachel Hafer is Director of Life Enrichment and Memory Support at The Preserve, which offers skilled nursing, transitional care and assisted living facilities.